It appeared to be a good project but somehow between the idea and completion stages something went wrong. Why do well conceived and researched CAPEX projects fail to deliver expected benefits or exceed cost estimates?

The Good, the Bad and the Ugly

3 scenarios in which a CAPEX project comes to life in an organization:

It was a good project. It started as a great idea and garnered broad support. Costs and benefits were calculated with a high degree of effort based upon the available information. Everything was correctly entered into the Excel spreadsheets and analyzed. The financial ratios pointed to it being beneficial to the Company. It was evaluated against other projects and based on that, received budget approval. Work began and that is when it all went downhill till a shadow of the great idea was eventually capitalized.

It was bad from the start but somehow moved along the CAPEX process. Normally it would get culled, but it kept going. Manager’s pet project, something we think we should be doing – well it seemed like a good idea at the time! Good numbers are emphasised, bad numbers massaged or ignored and so the wreck continues. Eventually the project is approved, completed and capitalized. Not surprising, benefits are not realized, costs exceeded and assumptions proven inaccurate. If anyone ever looks, it was always someone else’s idea.

The boss wants it so make it happen! I don’t care how, just do it!

If an organization has a poor culture around CAPEX, driven from the top, then there is little one can do. It is Ugly and will stay that way till management or the culture is changed! If the culture is good but there are some bad habits, then CAPEX has a chance. By taking as much of the subjectivity out of the evaluation process as one can, bad habits are reduced. Having said that, even where there is a good, positive culture around CAPEX, projects can still fail for reasons not normally considered.

A good evaluation process is one which is as objective as humanly possible. Problem is, by its very nature, evaluations are subjective. If the evaluation process is standardized, then only the selection of criteria within the process are subjective. This means that, by using a standardized, organizationally targeted evaluation matrix for a specific Investment Reason and Dimension, all projects which fall into that classification are scored in the same way with only the selection of the pre-defined criteria being subjective. By scoring several different Dimensions in this manner, it allows for seemingly different projects firstly to be objectively comparable and secondly makes it difficult for the process to be manipulated; for example pet projects.

The Numbers are Variable

Numbers are absolute! They are, but only if correct. When planning a CAPEX project around Growth you are not only looking at the actual cost of the asset, but also the benefits derived from the asset to justify the investment. (Asset cost, quantity, selling price, cost of production etc.) In reality, the numbers used are a best guess. How would it impact your financial ratios such as NPV, IRR, PI, etc. if the asset cost was 5% more or sales quantity 10% less? The numbers are therefore variable and can be anywhere between their best and worst estimate.

Assign a Degree of Confidence

How confident are you therefore in your numbers? It is very difficult to be 100% confident but it is not that uncommon for some numbers to be 100% or more inaccurate in the end. The degree of confidence one has in a number is normally directly related to the amount of effort one has put into establishing the number. If you have a fixed, contracted price for a cost, you have a fair degree of certainty in that price but if you have a vague idea of what the cost will be, the likelihood of significant price variability, both positive and negative, is high. When considering the costs and benefits of a project it is therefore important to assign a degree of confidence to each number that makes up the total cost.  By assigning a degree of confidence to each number you not only capture the expected number but also the potential variability in the number. This variability lends itself to evaluating the project against different scenarios (best case, expected, worst case.)

By having a single static number in a CAPEX proposal, you are effectively putting forward the expected scenario for that number but what about your decision process in getting there? How good could that number have been or conversely, how bad? By capturing all 3 it means you have a range of possible numbers rather than a single number. When considering best it would be linked to external factors such as economy expanding above expectation, our industry exceeding expectation, positive pricing pressures etc. and similarly the reverse for worst. Different projects would fare better or worse than others under these scenarios and so would ultimately affect our CAPEX selection depending on the scenario. The variability between the best and worst case will also determine how much risk is associated with undertaking that specific project.

By having this variance in the number, between best and worst, it enables us to assess the risk faced by the project and therefore assign a risk profile to it, extreme through to low. When one looks at an investment portfolio you generally do not want all high-risk investments even though the potential reward may be higher because if expectations are not met you face the probability of your portfolio doing very badly. For this reason, you select a mix of high to low risk investments to balance the risk and so achieve more certainty in the overall portfolio return. CAPEX is no different but how often is project specific risk considered in portfolio selection?

CAPEX projects often have resourcing requirements. An engineer, an excavator, a ton of sand. For internal resources the organization will typically have internal costs for these resources so budgeting for them is easy. Quantity multiplied by price and you have the cost to enter into your budget. Job done! Or is it? What happens if there is one engineer but two different projects need the engineer at the same time? One project will get the engineer and the other will be delayed while waiting for the engineer to become available or will need to outsource the work. Delays and urgent outsourcing typically cause extra costs, costs not budgeted for. What this means is that if you are looking at utilizing internal resources, and it often occurs with external suppliers as well, you need to check availability of the resource when planned. If the demand exceeds the supply of any resource then you need to allow for it when budgeting. What makes this even more complicated is, even when you ensure all resources are available for all the projects scheduled, one of them may experience a delay. How do you deal with this?

So Why do Good CAPEX Projects Go Bad?

Typically, a CAPEX budget is made up of several initiatives all of which have static numbers to justify their inclusion but:

When the project is undertaken and completed, if your answers to 1. was 100%, 2. none and 3. were all available, then most likely the project occurred as budgeted. However, if these are not your answers, then the project had a different cost to what was budgeted. Sometimes the variance is minor but often it is a significant number, invalidating the anticipated benefits and ultimately losing money for the organization.

For a project to have the best chance of success, it is imperative that, amongst others, you look at all costs in relation to the three questions above. The problem now is, how do you do this? As the multi-dimensional simultaneous analysis required is generally beyond Excel, except for the most basic projects?

IQX Business offers industry leading solutions to facilitate it for you. They allow for the objective evaluation of projects against each other by; scoring and ranking them according to multi-dimensional, entity specific, evaluations; evaluating their potential cost / benefit / resource utilization variability based upon different scenarios and, based on these, allowing projects to be dynamically moved around to best utilize multiple limited resources to deliver a suggested list of CAPEX projects which represents the best utilization of these limited resources, and which fits within the risk profile corresponding to entity’s goals and strategies. 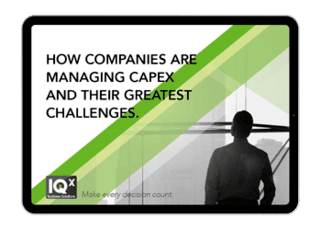 If you enjoyed reading this, then please explore our other articles below:

What is Capex Software and Why You Need It

Growth vs Maintenance Capex: What You Need to Know