C’mon let’s be honest here – like it or not, we’ve probably all watched a few Simpsons cartoons in our time haven’t we? Furthermore I’m sure there were a few Homer Simpson one-liners that got you laughing.

For those sadly deprived from enjoying the antics of America’s famous yellow Springfield family then perhaps Wikipedia best describes the hit cartoon. “The Simpsons is an American animated sitcom created by Matt Groening for the Fox Broadcasting Company. The series is a satirical depiction of a middle class American lifestyle epitomized by the Simpson family, which consists of Homer, Marge, Bart, Lisa, and Maggie. The show is set in the fictional town of Springfield and parodies American culture, society, television, and many aspects of the human condition”.  It also generated some classic one-liners from its 580 episodes that will arguably be with us forever.

I want to focus my attention on Homer Simpson, the dim-witted, crude, lazy and incompetent but strangely loveable husband of Marge and father to Bart, Lisa and the baby Maggie. I want to use Homer to address the topic of User Experience (UX) if I may. 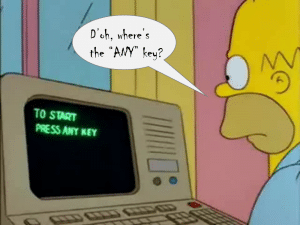 Where is the “Any” key indeed?

Whether we’re paying bills, booking flights, reserving movie tickets or any other daily process, we’re interacting with online or even paper-based forms or applications. What makes a form or application simple to use or “childproof” and why are some processes difficult? It’s really about the user experience isn’t it? My elderly mother can’t fill in any form (paper or electronic) unless someone helps her and that help is almost always simply translating the form’s language to words she understands. Why is this so difficult? What do developers and designers need to do to build better user experiences?

Wikipedia describes User Experience (UX) as involving a person’s emotions and attitudes about using a particular product, system or service.  It also goes on to say that UX is subjective in nature and is about a person’s perceptions of system aspects such as utility, ease of use and efficiency.

I think designers and developers often overlook the point about the emotional response a user has when interacting with a form or process, I know I get angry when I have to fill in my name, address and contact details 3 times on the same form or when I am presented with a desktop screen when I’m using my mobile. Anger and frustration make for a poor user experience which often takes way too much time and can result in mistakes being made.

For those Simpson fans out there, do you recall the episode where Homer’s wealthy brother gives him carte blanche to design the car of his dreams intended to appeal to the average man in the street. Homer was put in charge of the design team and ended up creating a monstrosity that resulted in his brother’s company going out of business.  There is a lesson to be learnt there in that where UX is concerned it’s never a single opinion that is needed – especially not just that of the developer. At the recent SAUG conference in Melbourne, Jon Moy presented a paper on UX and mentioned some great tools available today where designers can send mock-ups out to a broad user community for feedback. If Homer asked even one other person for an opinion on his “car for the working man” I wonder mow many of his design features would have been accepted. Jon in his presentation went on to say that any solution development needs to start with something probably unfamiliar to developers – EMPATHY. Truly understanding the needs, capabilities and even the environments that prospective end users will operate in is what’s is needed. Designing user screens and forms before the technical design and soliciting user feedback before a line of code is written is a step that should be included in all development projects.

If we were to carefully consider the target audience, for Homer, perhaps the “ANY” key should be replaced with a doughnut shaped icon.

As IT developers let’s make a commitment to considering our target audience and improving user experience.